Will "Law-and-Order Minorities" Put Trump Over the Top in 2020?

2020 is when racial identity politics, after creeping up on Democrats for years, finally pounced and ate the party’s entire brain.

Identity politics is now the starkest division between the parties. In the Democratic vision, a leading function of the government should be to probe into and root out all gaps in income and wealth between racial and other identity groups. On the Republican side, “merit and hard work should determine advancement in our society.”

But will identity politics help Democrats win the election? Or will minorities, worried by real issues like months of looting and lawlessness, be the ones to put the supposed racist Trump over the top in 2020? 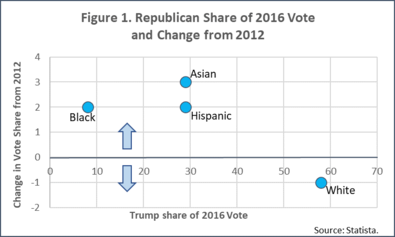 It wouldn’t be the first time. There’s a myth that it was disgruntled lower-class Whites who got Trump elected in 2016. In reality, Trump’s share of the White vote in 2016 fell to 58% from Romney’s 59% in 2012. Many lower-class White Democrats did indeed cross over to Trump, offset by the more educated, “aspirational” social-climbers who shifted to Clinton.  Instead, it was among minorities that Trump made gains of 2-3 percentage points, and who likely put him in office. (Figure 1.)

This year Trump is behind in the polls but has started to close. It is not easy to infer what is behind his recovery because most pollsters release their detailed “internal” numbers only to customers. But there is enough to suggest that, while Trump may lag with others, he is gaining ground with minorities.

Why might minorities favor Trump?  There are probably some gradual long-term reasons in play. As immigrant minorities assimilate and become just regular “unhyphenated” Americans over several generations, they are unlikely to continue voting for only one party in such lopsided numbers. (See Eric Kaufman: Whiteshift – Populism, Immigration, and the Future of White Majorities.) Plenty of minorities agree that “merit and hard work should determine advancement in our society.”

But the most immediate reason is likely that minorities tend to be ardent law-and-order enthusiasts, and minority small businesses and workers are among the hardest hit by the BLM/Antifa rioting since the end of May. Many will see Trump as the champion of law and order, the Democrats of sympathy for the rioters, and weaker police. 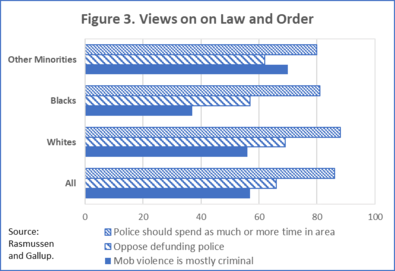 Independent journalist Michael Tracy has a graphic report on the ruin and trauma that have followed in the train of the riots. It is a story, he says, that the national media has mostly shrugged off, partly from political sympathy with the BLM/Antifas, and fear that the facts will politically benefit President Trump.

“There is a reasonable argument to be made that these riots were unprecedented in U.S. history — or at the very least, since the 1960s. Yet if one surveyed the national media today, you’d barely even know anything happened. Nor would you likely be aware that those who bore the brunt of the destruction — largely minorities (my emphasis) whose sensibilities don’t fit into any neatly-delineated ideological category — are still acutely suffering from the fallout.”

While riots in large cities got some attention, “there were also smaller-scale riots in surprisingly far-flung places that you hardly would have known about,” including “to take just a small sampling: Atlantic City, NJ, Fort Wayne, IN, Green Bay, WI, and Olympia, WA.” To which, in the last few days, add Kenosha, WI.

“In speaking with locals, many of whom have lost their livelihoods or had to plead for their children not to be burned alive, it often seems like the extent of the ruination they’ve experienced was barely ever appreciated in the first place.”

Tracy does the job the mainstream media won’t, by visiting riot-affected areas and talking to the citizens.

Here is a Somali business operator in Minneapolis who describes the mostly white rioters who attacked his deli and a nearby Mexican convenience store, while police were nowhere on the scene.  Virtually the whole neighborhood is boarded-up. Elsewhere a Lao community center is boarded-up and closed off with yellow police tape. A Hmong business owner tots up losses after the ransacking of his clothing store. An auto repair shop operated by an Ethiopian immigrant is now a burnt-out shell. A convenience store owner from Sierra Leone who took up arms to protect his business says: “I grew up in a war zone, and I’ve never seen anything like it.”

“Of the dozens and dozens of randomly-selected black Americans that I have so far spoken to across the United States, only two expressed what one might call a “positive” view of the riots… Everyone else I have encountered is unabashedly scornful of rioting, and many even express apprehensions about the basic logic of a movement referred to as “Black Lives Matter” which incongruously appears to them to have caused increased suffering in their predominantly black neighborhoods.”

“It’s crazy man. I really don’t understand it. Cuz they sayin’ Black Lives Matter and all this stuff… But man, you’re hurting the black community.”